The endeavors of February

So we thought that January was busy we obviously weren’t ready for the results of the last post! Between LARPtronics and Dragon Armories the Dreams of January have not only been realised but have dragged us along behind them whilst they ran rampant through the streets, drinking, gambling, participating in karaoke competitions and attending all night cafes. When we stumbled home in the morning we discovered that alongside the usual sundries (traffic cones and the like) we had picked up a whole new gang of other dreams who joined in the party and then moved in. They have even started phoning friends like inspiration and ingenuity who have agreed to grab some beers and head straight over. Mainly we have been telling them about the projects that we started in January and where they have taken us:

We spent a lot of time working on the methods that will be used in future weapons, armour and shields so that they could be tested to destruction levels. These methods were employed in the development of Prototype one which was put together over the course of one final week:

Once finished we decided to put the sword through its paces in a local LARPing system called the Rising of Chaos based in Southampton. They run EVERY weekend of the year for a minimum of two days each over each one. Last year they ran 150 events blending incredibly in depth story with economics, politics and high fantasy but above all they do like to fight. It is the perfect place to see how long kit will hold up under pressure. 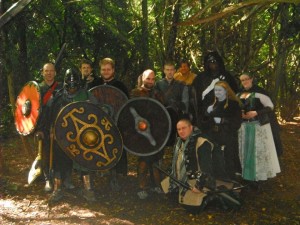 From the first week of testing RoC reports that the weapon is fine under weapons testing/safety check conditions. The Dragon Armory build is excellent the non-tear design works perfectly and the blade was sufficiently wowed by all involved. The electronics in the blade functioned all day without a hitch although there were a few problems with the power regulation from the pommel. That minor problem is being redesigned for prototype two already but I suspect that the main thing people want to see are some sequences of the blade: 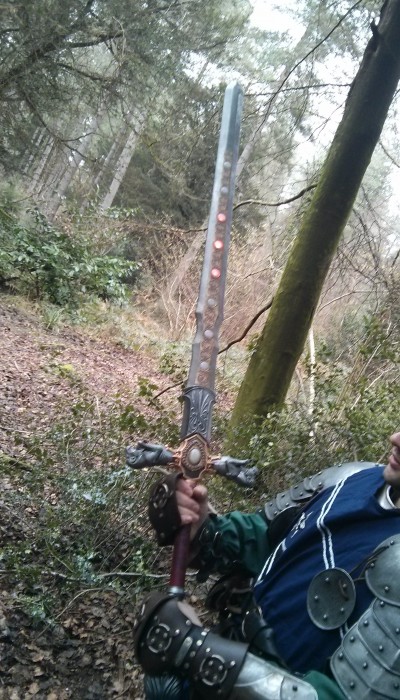 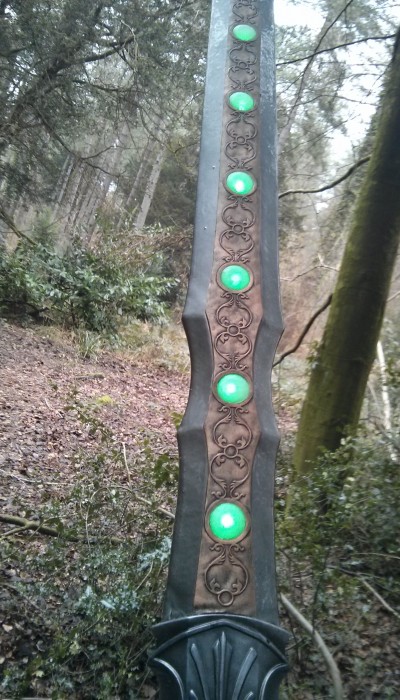 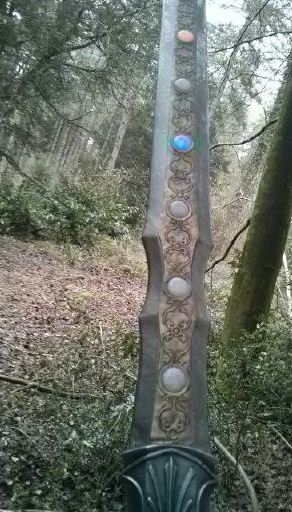 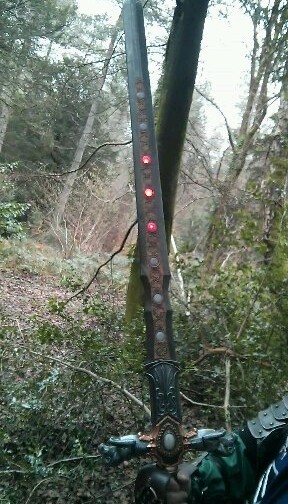 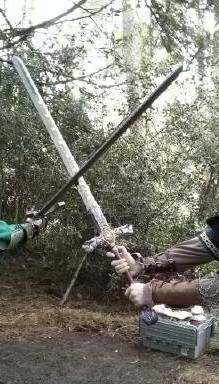 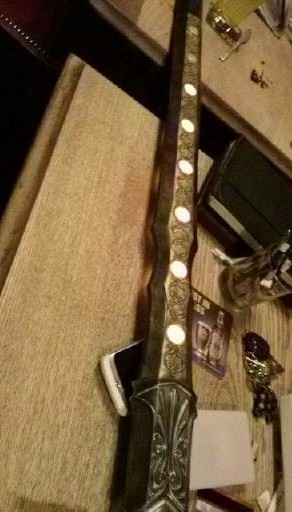 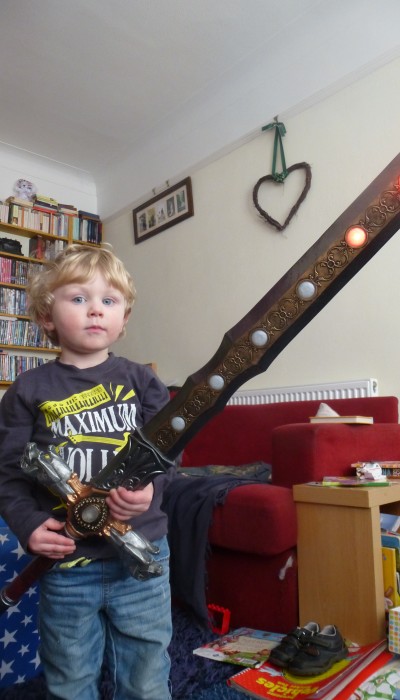 As you can see the Dragon Armory design is itself elegant with a new technique employed by Jay in the crafting of that beautiful filigree on the blade. Alongside that gorgeous work the gems that provide the source of light will be carved with specific runes for different systems or individual characters to give the blade a sense of completeness. Finally of course the penultimate picture shows the blade in the pub still working after its first work out. Thanks to RoC we will continue to push prototype one whilst we develop its replacement until we have learnt what we can.

We are developing quickly and days spent in discusion are leading us in new directions. A cornicpopia of ideas are on the horizon several of which we have pioritised to get to several of the big Rising of Chaos events in March and April:

Differing from the first sword in that this model will be a one handed weapon we will be incorporating a number of changes to the sword:

As with the previous projects we will be working with Dragon Armories and for this model the Death Knight Sword will be the base. We are already foreseeing the eldritch light spilling from the mouth of the skull on the hilt! Here, for those unaware are some snaps of that blade. 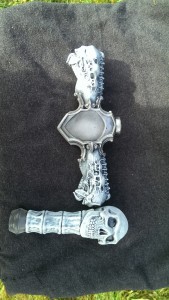 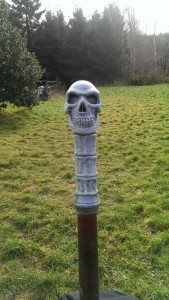 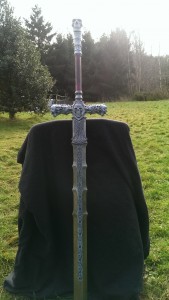 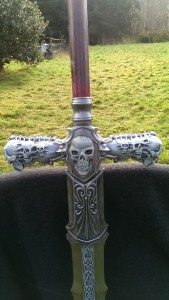 This is proposed to be put through its paces in a Napoleonic Fort in the early part of March, again we will be on hand to record this event!

Just for a quick update on this project: We hope to have the gauntlet done to the same deadline, it will function as already stated in a previous blog although we are considering 6 rows of gems individually controlled for varying patterns responding to movement. The electronics, animations and moulding are well underway with the preliminary shots of the Gauntlet looking like this: 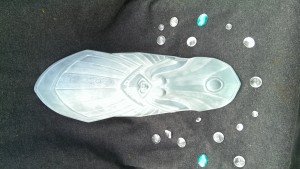 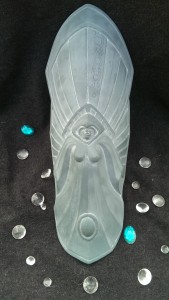 Alongside the Rune Blades we are preparing the line of weapons that will support them: Staves and Hammers with light emanating from their core’s and, of course, rune axes have all been discussed.

We have also designed an Archway that we want to be active around April time that will illuminate (among other planned effects) when passed through and also light orbs (that we will be taking to Empire) that will increase in their brightness and colouration when users of Arcane Power and type get closer to them.

Our final project starting this month will be the “magic items” that function as detectors, that will be amulets or sword pommels that begin to glow, getting brighter and brighter as a type of monster, Undead or Daemon for example.

The project as a whole is rolling forwards well with continual messages through most mediums and hits from all around the globe. We would like to take this early opportunity to thank all who are supporting and following us for such a great reception and all of the heartening words that we keep receiving. Keep on liking, tweeting and sharing our bits and bobs and by all means keep commenting and asking us questions; filling our heads with even more ideas is probably for the best.

Here in England we have begun to speak to various systems, including the larger ones and have, in the main, received very positive feedback for us, our kit and its use at these events. We will certainly be out on the field at Empire and probably the Gathering this year and by the end of next month we will be creating a list of systems and events in which LARPtronics kit is accepted.

When we will be able to buy your wonderful toys?

Our plan is to be giving you a choice of product in the second half of the year with a variety of weapons, props and sundries that will enhance your LARPing experience.

And that is me done for today. Until next time people, have a Foxes and Crows time.