The Relentless Advance of Technology

Roughly 7 years ago, Stephen and I looked into the possibility of creating a Larping world where all the gameplay mechanics were hidden away and managed by actual devices, running programs and interfacing with small PCs (this was 4 years before the Raspberry Pi came out), driving real world encounters entirely using programmable components, all linked up in a network and able to influence the world around them (dispense clues / answers, unlock doors, turn lights on/off etc).

In the end we had to shelve it because the technology just wasn’t there to do what we wanted to with the budget that was available to us. 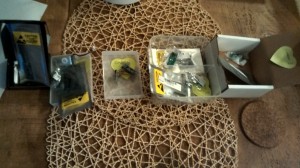 what all LARPtronics projects start off looking like.. but what will they become?

In the last 18 months technology has reached a point where it is so small, cheap and low power, it has the possibility to become ubiquitous.  Most people will point to their smart phones as a prime example, and while this is true.. there is so much more out there, hidden away where you can’t see it.  In addition to appliances, there is a whole world opening up to us:  sensors for all occasions, Smart textiles, flexible circuit boards, conductive thread, capacitive touch fabrics, fabrics that glow or change colours when a current is applied,  high resistive circuits formed by people (and/or bananas).. the list goes on and on. 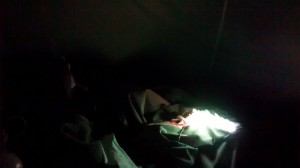 I no longer need a torch to see my stuff in the dark of my tent.. my kit glows.  This is just the beginning 🙂

A Technology wave called “the internet of things” is rising, and it is on the crest of this that we aim to ride.  In summary it is a vast network of devices all representing real world objects, all being able to communicate with each other appropriately to perform context sensitive functions (IE: a tap is most interested in things like how close to overflowing the sink is, whether the plug is open, and the temperature of the water, but less likely to be interested in football scores, or what’s on TV).

How does this relate to LARP?  Not all of it directly (unless you are running bananaLARP <48 views, only 2 by me btw>, in which case, please keep away), but many of these technologies can have a direct impact in sustaining the suspension of disbelief required in LARP.

For the main part, any simple task that is currently performed by a ref or represented by a system call is fair game for being replaced with a bit of tech.   From simple light/dark spells or discern/sensing abilities to ritual effects or enchantments, all are possible.  Possibly the most exciting aspects of this are the things that previously could not be achieved through refs or system calls, so do not exist in the worlds of LARP at all, but could be made possible through the creative use of technology. 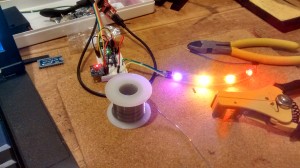 But first we must understand the limitations of these technologies, and explore this new world. Some of the things I wanted to do in 2007 will forever remain impossible, some I know are now possible (just look at what we are putting together – they couldn’t have been built 5 years ago outside of a lab), but more excitingly, many things will be possible that I have never dreamed could be so.